You’ve finished a fresh batch of raspberry jam, let it sit to cool, and you’re all ready for the canning process. You start canning the jam, but don’t hear that pop.

You’re asking yourself a couple of questions; first, why didn’t it pop? Second, what should you do if your canning jars don’t seal? You’re asking what to do if canning jars don’t pop, and you’re not on your own. This is an issue which has happened to many people, even professionals in the industry. If you’re in this situation, you’re not alone. There are any number of reasons why your canning jars didn’t seal with that all familiar “Pop!” Don’t fret… at least not yet. Let’s go through a few of the common reasons why this might’ve happened, and what you can/should do to remedy the problem.

Why Didn’t the Jar Pop?

You’ll first want to figure out why the canning jar didn’t pop and seal itself properly. Several reasons exist to why this might have occurred including

And, this isn’t an all inclusive list of the reasons why the jar didn’t properly seal itself after the canning process. Does that mean toss everything and start over (including those preserves/jam that took so long to make)? Not just yet.

But, what are the primary reasons the jar isn’t popping? What do I do when the canning jar didn’t seal itself?

Most Common Reasons it Didn’t Seal (and the cure)

Now that we’ve gone through a list of some of the reasons you might be having this issue, let’s dig a little deeper into those which are most common, and how you can fix them, and how to possibly prevent this issue from occurring in the first place.

Problem 1: The Wrong Jar and Lid

This seems pretty self-explanatory. If the wrong jar and lid combination are the reason behind the jars not sealing in the canning process, there’s one of two reasons. It’s either the jar is too large/small, or the lid is.

Don’t buy cheap jars. Honestly, resist the temptation to save a few cents per jar, and choosing odd jars just because they are cheaper. Especially if you plan on making canning a lifestyle (or plan on selling what you’re making), you’re going to want to invest in high quality, well-made jars. It makes a difference!

If a jar lid appears it might have been used, don’t reuse it. Even if it hasn’t been used, the slightest appearance of it having already been used on another jar, should dissuade you from wanting to reuse it. The reason being is that once the lid’s been used, it lacks sufficient sealing compounds, and they might not be 100% flat. This can result in air getting in between the jar and lid, which will result in no pop during the sealing process. 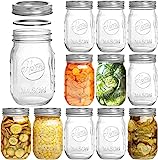 Problem 2: Not Enough Heat is Present During Canning

If processing heat wasn’t sufficient during the canning process, the jars won’t seal. When there isn’t enough heat, air can’t get out of the jars, won’t create the vacuum seal, and the jars won’t pop.

Make sure the pressure reaches/stabilizes at that pressure level. Make sure it maintains that pressure for the recommended amount of time as well. This not only ensures the food is hot enough for you to seal it, but also will help prevent spoilage from occurring prematurely.

If air gets trapped during the canning process, the jar isn’t going to seal. You have to be especially careful with foods requiring raw-packaged foods, to prevent too much air from circulating into the jars while you’re canning the foods.

If you’re working with dense foods, make sure to remove any air before sealing (foods like squash, pumpkin, or foods with a thicker consistency). You can do this simply by taking a butter knife and slipping it below the pathway where you close the jar during canning, to prevent allowing air bubbles from forming (alternatively, you can use a spatula instead of a knife).

If the screw bands are damaged, rusted, or otherwise compromised, they aren’t going to produce sufficient pressure around the jar’s rim. Without sufficient pressure, the sealing lid won’t grip the jar, which prevents it from sealing shut (ie, no pop when you try to close the lid).

Quite simply, inspect the lids. If they appear old, rusted, or dented/damaged, don’t use them. Even if those lids are brand new, and you know they’ve never been used, it’s better to be safe than sorry and prevent the issue of the jar not sealing during the canning process. If you run the bands through a dishwasher before canning, this can also cause them to possibly rust. Especially if they’re sitting in a cabinet for a few weeks or months before you use them. So, avoid doing so if possible, and if you do have to wash the bands, do so by hand and make sure you fully dry it off before putting it away, to prevent it from rusting.

If the jar’s defective, it’s not going to pop when you seal it shut. What’s a defect?

Yes, something as simple as a small crack or chip on the lid of the jar can ruin the canning process. If it isn’t a smooth, even surface, even if all other conditions are stable for canning, you’re going to miss that elusive pop sound during the final stages of the process.

Again, it’s pretty simple. Take your finger and rub it on top of the jar. You might want to wear a glove or use a towel to do this instead, in case the glass is chipped to prevent cutting yourself. But, if you notice any groves or differentiation in the level of the jar’s rim, don’t use it. Also, visual inspection is a good idea. Even a small chip or crack in the glass is highly visible in certain lights and angles. So, do a visual scan of the jar. Don’t just assume it’s okay, you don’t want to go through the entire process and preparation, only for the jar not to seal because of a minor defect in the rim.

What Else is Going on?

You might simply be doing it wrong. Don’t worry, you’re not alone. If you’re a beginner or novice and are new to the canning process, this happens. Even if you’ve been canning foods for several years and have commercial experience doing this work, you might make an error every once in a while. For example, not following the proper procedure for canning certain foods and taking shortcuts, can result in the jar not sealing. What’s the solution? Going through the process as it is intended!

Sometimes the solutions are straightforward and simple, in other instances you’ll have to reprocess, and in some cases, you’re best served by tossing the cans and food and starting over.

In the event a lid does fail to seal, you can reprocess the canned foods. The first way to do this is to remove the lid and check the jar’s surface for nicks. If that’s the issue, change the jar, add a new lid, and wait 24 hours before reprocessing.

A second option for reprocessing is refrigerating the unsealed jars and eating the canned product. It’s advisable to eat that product within 7 days of placing it in the refrigerator to guarantee freshness.

The final solution is adjusting headspace in a jar if it’s unsealed. This allows the jar to expand, and rather than reprocess, you’d put the jar in the freezer to preserve the canned food.

As you can see, there’s no single reason that jars and lids aren’t sealing. Any number of issues can be ruining the process. So you can see, the answer to your question, “what should I do if canning jars don’t pop or seal,” isn’t a single answer solution. Depending on what’s causing the jar not to pop or seal, will have it’s own set of solutions. If you’re new to canning, take it slow, follow the process, and don’t skip steps. Even if something seems trivial, it’s part of the process for a reason. And, bear in mind that even professionals in the canning industry have issues sometimes, so don’t beat yourself up about it too much. Move on, and keep improving your craft!

Be sure to check out our guide on how to can bell peppers!

This site is a participant in the Amazon Services LLC Associates Program, an affiliate advertising program designed to provide a means for sites to earn advertising fees by advertising and linking to Amazon.com. We are compensated for referring traffic and business to Amazon and other companies linked to on this site.