Many people enjoy pickled cucumbers as a healthy snack with a tangy and slightly sour taste. You can eat them straight from the jar or add them to recipes, like salads and sandwiches. If you want to preserve cucumbers for many more months, it is easy to pickle cucumbers but may take some time. But, what exactly are the best cucumbers for pickling?

Many people enjoy pickled cucumbers as a healthy snack with a tangy and slightly sour taste. You can eat them straight from the jar or add them to recipes, like salads and sandwiches. If you want to preserve cucumbers for many more months, it is easy to pickle cucumbers but may take some time.
Jump to Recipe Print Recipe

What Type of Cucumber Should You Pickle?

Pickling cucumbers are grown for pickling, as they are smaller and have a crisper texture compared to slicing cucumbers. Even after pickling, they maintain their original texture and flavor. Additionally, they absorb more flavor during pickling because of how dry they are.

Boston Pickling cucumbers are black-spined with abundant flavor, crisp texture, and few seeds. Their seeds yield a lot of cucumbers, which are best enjoyed when 5-15 cm in length.

Homemade Pickles cucumbers have white spines, a medium green color, and a classic pickle shape. They have a crunchy texture paired with a sweet taste, perfect for making gherkin pickles. You can harvest them at 4 cm for baby pickles, but they typically grow to about 5-15cm in length.

Miniature White cucumbers have a distinct creamy-white color with some black-tipped spines. They are somewhat sweet and crisp, making delicious dill pickles. When picking these cucumbers, look for ones no longer than 8 cm.

Calypso cucumbers are dark green and uniformly shaped with some white spines. They have a firm texture and make classic pickles. When grown, they are very resistant to diseases and are best harvested when 10-13 cm in length.

National Pickling cucumbers are medium green with black spines. They are known for their crunchy texture and bitter-free taste, making them perfect for soaking up flavor when pickled. When harvesting them, look for cucumbers 10-15 cm in length.

Kirby cucumbers are small, typically less than 15 cm, and have bumpy skin. Given their unwaxed outer layer and lack of seeds, they pickle conveniently. They also have a very crunchy texture, making them the most common pickling cucumber.

Parisian Pickling cucumbers are dark green, slender, and have thick flesh. They taste sweet and have minimal seeds, making them great as gherkin pickles on a charcuterie plate.

Bush Pickle cucumbers are dark green with pale, green stripes. They do not vine out, growing well in containers and small spaces. Harvest them when they are 7-12 cm long for the most flavor and crunchiest texture.

County Fair cucumbers are dark green and seedless if grown away from other varieties. They are bitter-free, sweet, and crunchy, making delicious chips and spears. These cucumbers can grow up to 20 cm but are best harvested at 5-10 cm for pickling.

How to Pick Fresh Cucumbers

Your pickles will be as good as the cucumbers you use, so you need to pick fresh produce. Here are some tips to help you choose the best cucumbers for pickling:

Tip #1: Avoid cucumbers with blemishes and soft spots. Instead, find cucumbers that feel firm because they are fresh.

Tip #2: Try using cucumbers less than 15 cm long. You do not need to chop short cucumbers before pickling, making them more convenient.

Tip #3: Look for cucumbers that feel drier and with more spines so they can soak more pickling brine.

How to Pickle Cucumbers

Before pickling cucumbers, you must wash them with water to eliminate dirt, bacteria, and pesticides. The cucumber skin will remain unpeeled, so ensure you rinse thoroughly.

You can pickle cucumbers whole or cut them into discs depending on your preference. However, your cucumbers should fit in your pickling jar. A 16-ounce or pint-sized jar will fit about four to five whole cucumbers.

The pickling brine you use will determine the flavor of your pickles. This guide uses a simple vinegar brine made up of distilled white vinegar, water, sugar, and salt. However, you can use any pickling brine recipe, depending on your preference. Note that the longer your cucumbers spend in the brine, the more flavorful they will be.

You can use a pint-sized, wide-mouth mason jar to store your pickled cucumbers. Its wide mouth makes it convenient to transfer pickles, and its size is perfect for portioning. Still, you can use any pickling jar as long as it is air-tight.

How to Use Pickles

Relish makes a delicious topping to sandwiches, hot dogs, and fried seafood. Using your pickles, you can make some homemade relish! All you need are dill pickles, brine, hot or sweet mustard, and fresh dill.

Crunchy pickles and tangy brine can give your salad quite the punch. You do not need to limit yourself to green salads, as pickles make delicious salad dressing for egg and potato salads!

If you have leftover pickle brine, you can use it to pickle almost any other vegetable. Some vegetables that taste delicious when pickled include lettuce, carrots, and even celery!

What Cucumbers are Best for Dill Pickles?

Kirby cucumbers are firm, retaining their crunchy texture even in dill brine. They are easy to pickle, given their small size, unwaxed outer layer, and lack of seeds. Parisian Pickling cucumbers also make great dill pickles, given their sweet taste, thick flesh, and minimal seeds.

How Long Do Pickled Cucumbers Last?

When stored in an air-tight jar, pickled cucumbers will retain their crunchy texture for 2-3 months in the refrigerator. After that, they will last 4-5 months before going bad. Canned pickles, however, can last up to a year in the pantry due to the vacuum seal.

How Many Flavors of Pickles Are There?

Are Pickles and Gherkins the Same Thing?

Gherkins are a type of pickle with a specific size and texture. They are smaller than other pickling cucumbers, about 3-13 cm long when harvested. Additionally, they are crunchier with bumpy skin.

Are Gherkins Sweet or Dill?

Gherkin pickles can taste sweet or dill flavored, depending on the brine you use. Adding sugar to pickling brine will make it sweet, whereas adding dill herb gives it the classic dill flavor.

Pickling is a fun and tasty way to add flavor to your everyday meals, from sandwiches to salads. Pickling cucumbers are best to pickle because of their smaller and crunchier texture. The next time you visit a farmer’s market, pick up an extra batch of Kirby Pickles, Boston Pickling, and County Fair cucumbers!

If you enjoyed this guide on pickled cucumbers, you could learn how to can pickles. 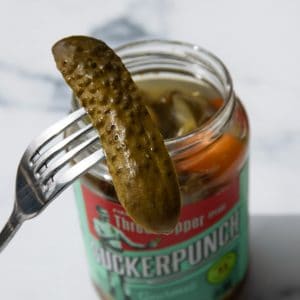 Many people enjoy pickled cucumbers as a healthy snack with a tangy and slightly sour taste. You can eat them straight from the jar or add them to recipes, like salads and sandwiches. If you want to preserve cucumbers for many more months, it is easy to pickle cucumbers but may take some time.
No ratings yet
Print Recipe Pin Recipe
Prep Time 10 mins
Cook Time 20 mins
Total Time 30 mins
Course Preparation
Calories 334 kcal

This site is a participant in the Amazon Services LLC Associates Program, an affiliate advertising program designed to provide a means for sites to earn advertising fees by advertising and linking to Amazon.com. We are compensated for referring traffic and business to Amazon and other companies linked to on this site.